During agility training for tennis you focus on moving and changing direction as quickly as possible! Learn more and watch the agility drill videos!

No doubt, when you think of a competitive tennis match, the first performance attributes that come to mind are speed, reaction time, agility, and power.

So how do you improve all of them and how about footwork: how important is it?

I’ll provide some more answers to these questions so keep reading.

The concept is to enhance kinetic energy transfer (kinetic chain efficiency) because it reduces the risk for injury by enhancing joint alignment and it optimizes power output since no energy is being “wasted” for undesirable movements.

Improving kinetic chain efficiency, amongst other things, can be accomplished by making the athlete very balanced with their strength so that the joints function properly.

This can be accomplished by enhancing range of motion (ROM)/flexibility. We’ll provide some exercises for you to do just that.

Take for example the “house building” analogy. A house will become a sound structure if the walls and beams (connecting points) are strong enough to support the weight of the roof, otherwise the house collapses, no matter how thick (strong) the walls are going to be.

On the other hand during Olympic lifts the athlete needs to stabilize everything without the help of any external object.

That means that the surrounding musculature (e.g. stabilizers) will also become stronger like the beams in the house “building” analogy.

So, the goal is to make the athletes very balanced (muscle balanced) with their strength and increase range of motion so that the joints function properly.

Then you apply everything else, e.g. agility training.

Most coaches just want to focus on resistance or speed but if you make something faster or one makes something stronger but it’s already imbalanced then you will increase the imbalance.

That will then commonly leads to injury and hence the coach did nothing that was beneficial.

Ok, first let me define what agility is. Agility can be defined as “the ability to move quickly and to change direction rapidly” and often is a component of speed endurance (explained shortly).

Should you have structural imbalances due to flexibility issue then you can correct the imbalances by dynamic stretching before training and static stretches afterwards.

We have 15 perfect warm ups that prepare you for your match and 22 static stretching exercises for your tennis cool down. Just pick the ones you like the most!

Now, many tennis players have knee pain, which can be due to strength imbalances of the hip and leg musculature. If that’s the case then you should address these imbalances first.

We have 9 great exercises for you!

In case you have strength imbalances in your upper body, for example your right arms is stronger then the left arm, we have 9 great exercises for you.

Balance, the attainment of static equilibrium against all external forces, is a crucial component of agility.

You must have the ability to balance your body weight against the forces of acceleration and deceleration in order to quickly change direction.

For example, if you can balance on one leg while decelerating and simultaneously change the direction of your hips to accelerate in a different direction you are demonstrating the aspects of optimal agility required during stroke production.

You can use many of the presented balance and stability exercises to train your body and nervous system to perform these actions.

How To Train For Speed

Therefore, since power is a component of speed (and vice versa) you should work on enhancing power by improving flexibility, balance (stability) and speed.

Because stability and flexibility are key components in improving speed economy (explained below), you should focus on improving these components first!

In other words, if you can improve speed economy then overall speed (speed-strength & speed endurance) will improve because less resistive forces are counter-active and if overall speed improves, you become more powerful!

Therefore, in order to become more powerful, training should initially focus on:

In general, if you have poor economy in upper-body movement mechanics (e.g. arm swings during sprints) then it will affect lower-body speed economy and hence reduce maximum speed output.

But in tennis, since you are holding a racquet in both hands while running over the tennis court, upper-body movement mechanics are less important in optimizing speed than they are during a 100m sprint event.

ok, let’s assume you have no imbalances and are ready to start agility training.

Agility is a component of speed training and speed is defined as “the ability to produce force rapidly to move at a high velocity”.

However, there are multiple aspects to speed training:

The goal is to correct imbalances, optimize joint function and thereby preventing any “energy leakage”.

This is why you should correct any imbalances first before you start working on agility.

Following you find some workout videos you can use to gain improvements in some of the components of speed economy:

Improving speed strength is the focus in the weight room. Learn more about how to train to improve speed-strength.

Speed-endurance training usually takes place on the court (e.g. agility drills) or on the running track.

Bear in mind though that tennis requires you to move in multiple directions, including backpedalling, whereas sprinting on the running track only requires you to run forward.

Therefore, the majority of your speed endurance training should be done on the tennis court emulating the movement mechanics seen during a tennis match!

Our great interval training drill does just that – check it out:

What to Focus On During Agility Training

First is the enhancement of movement mechanics, which refers to improving speed economy.

Improving speed economy has a positive effect on speed strength and endurance. If less energy is being wasted, more energy is available.

That allows for faster movements (speed strength) while delaying the onset of fatigue (speed endurance).

So in short: you should basically learn the respective agility drill movement patterns in perfect form first!

Watch the following video to learn how to change direction in perfect form. Watch Alexander Ritschard performing a few agility drills on the court for you.

Once you have the movement patterns down in perfect form then you maximize your speed during agility drills.

In other words your main focus should be to move rapidly sideways and forward!

Learn more on how you can improve your agility and how to incorporate agility drills into your on-court tennis training:

Top players don’t run more than 3 miles per match, not even during the epic 2012 Australian Open best of five grand slam final between Novak Djokovic and Rafael Nadal! 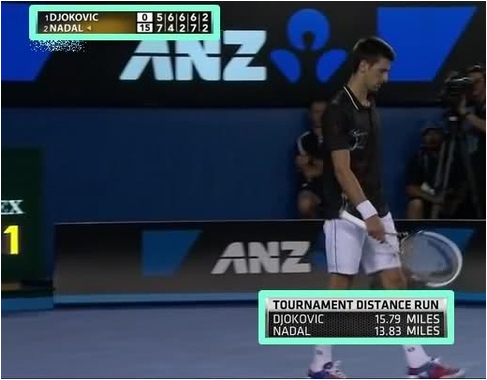 Matter of fact most tennis players don’t run more than 1,5 miles per best of three match.

That means tennis is not really an endurance sport. Of course you need speed endurance but tennis is rather power dominant and agility is important.

The guys for instance hit serves regularly in access of 125 mph/200km/h and pound the ball during groundstrokes. That means they need to be able to move extremely fast and change direction quickly!

Therefore, your tennis conditioning should emphasize the development of power, agility and speed endurance.

On the other hand the popular steady-state jogging is a waste of time from a tennis conditioning standpoint.